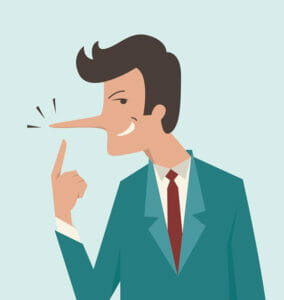 The other day a marketing publication featured an article titled “What To Do If Your E-mail’s Been Hacked.” These “experts” said that if your day was “disrupted” when you discovered you had infected all of your clients and friends with a virus due to them receiving an e-mail from you, you should “be proactive and send another e-mail to apologize to anyone who might have received a bogus message from you.”

They went on to say that “big-dog providers like Google and Yahoo know about it and will get rid of it on their end.” I can sense your underwear tightening up.

Another very well-known and in demand cyber security “expert” with a New York Times best-selling book, a TED Talk speaker with additional keynote engagements lined up at $50,000 a pop, with corporate clients paying BIG bucks for his advice, actually recommended that people turn off their computers at night to cut down on the chance of getting a virus by 50%. He DIDN’T advise them to install a firewall, spam filter, backup, etc., etc. Just turn it off. At night. When the bad guys come out.

Fake experts like this abound and screw everything up for legitimate experts dispelling sound advice. Some of these charlatans are relatively harmless, causing no more damage than separating fools from a little bit of their money.

Some, however, are downright dangerous with the advice they dole out, like Kevin Trudeau, author of the book Natural Cures “They” Don’t Want You To Know About, who is cooling his jets in prison for fraud, after telling people there are natural cures for serious illnesses, including cancer and diabetes, that are being deliberately hidden from the public by the government. Before the FTC got involved, he made MILLIONS of dollars from promoting his various books and information products by infomercial.

Another well-known sales trainer, at his peak, was living in squalor, broke and barely able to make ends meet, but promoted himself as a wealthy and highly successful sales pro who could get a check out of a rock. Another in this industry, serving MSPs, is promoting outrageously fake numbers, claiming he’s generating hundreds of “leads” for his clients, when in truth the numbers are nowhere near that – he counts hits to his website and clicks in an e-mail as “leads.” Total crap.

So, what are you to do about all of this?

For starters, beware the wizards of the world who promote themselves as experts. More specifically, be careful about WANTING to believe what they are peddling is true. One of the reasons a Kevin Trudeau CAN get rich is because there’s a big group of people who WANT to believe there are “secrets” being kept from them by the government, the rich, big corporations, etc. The Natural Cures book wasn’t the only one he did; he cut-and-pasted the same “What THEY Don’t Want You To Know” formula for getting out of debt, weight loss, getting rich (free money THEY don’t want you to know about), anti-aging cures and more.

Everyone WANTS to work a four-hour workweek, work out seven minutes a day, eat their way to weight loss and manage people in a minute or less (see the opening rant). That’s why these programs sell; but if you want real, sustainable results, you must be smarter than that.

Second, go to great extremes to be honest and totally transparent in every conversation, every marketing campaign, every communication to the public, to clients and to everyone you deal with.

A few years ago, I had a very interesting dinner with Mike Rowe, star of Dirty Jobs, the night before he spoke to our audience at Boot Camp. I asked him what he did to garner such a huge fan base. Without hesitating, he said total honesty and transparency were key. So many people are done with being deceived by the news, politicians, big corporations, “reality” TV and the like that they are HUNGRY for truth. He said that people are not just aware of BS, they are LOOKING for it, watching your every move, trying to figure out the hoax, assuming you ARE scamming them and trying to see a chink in the armor to point to and scream, “AHA!”

I’ve made sure to NEVER falsify any numbers, testimonials, case studies or facts provided. YOU SHOULDN’T EITHER. I’ve been brutally transparent, sharing real numbers, real challenges I’ve had in my business, mistakes I’ve made and honest advice based on what I actually do, not what’s popular or easy.

Despite what others may think, we don’t hide negative reviews and comments about us on our own Vendor Directory. This is why I don’t hide from clients asking tough questions about the “why” behind what we do, the results we’ve gotten and our methodology.

I openly admit to an 11% refund rate and routinely talk about the negative of our programs, which is that we aren’t going to come to your office and do it for you. I never hide the fact that the Toolkit is HARD WORK. That most people never get beyond the surface to implement anything and therefore get NO RESULTS. That’s not a product flaw, by the way, but a truth about human behavior that I cannot change or fix – but it’s one that has to be said.

If you have a fraud in your own backyard, distracting clients and causing you to lose business, my advice is to pay them no attention. Eventually, all frauds are found out – you just might not know about it because they don’t promote THAT. Focus on delivering excellence and transparent communication and you’ll win out every single time.

It is my belief that every point of contact someone has with your business is marketing. So when I say “focus on delivering excellence,” I mean it in every aspect of the business, and that’s what we help our clients do every single day. If this is an area your business could use help with, let’s talk! Schedule your FREE one-on-one consultation today at www.TechnologyMarketingToolkit.com/consult to get started!