If you’re the owner of the company, you have an entrepreneurial side of your brain, and you have an operations side. You’re sitting in front of a big prospect with big opportunity, big MRR, big project, and the entrepreneur in you is excited because you’re thinking, “This is money, this is MRR, this is growth, this is good.” While the operations side of you is going, “Shit,” because you’ve got to do the work, right?

Don’t tell me you’re not sitting there having this little moment. If you are operations, you might not do everything you need to do to get that sale because you’re a little bit scared of it. You’re a little afraid of quoting that bid. Believe it or not, prospects pick up on fear and uncertainty like a dog smells fear. Prospects pick up on that. They don’t understand that you’re just kind of anxious and thinking, “Can I do the work?” They just sense an uneasiness. Like, “I don’t know this guy. I don’t feel right with this guy.” All sales are remote, made on emotion, how they feel about you, how they feel about the opportunity.

They like talking to customers, and the operations side tolerates or resents it. When we bring people in to a Rapid Implementation Workshop, I have to stand over grown men to make them send an email to their customer to sit down and have a conversation with their customer. They’re literally scared to even talk to their customers. Entrepreneurs love it.

Look, I’m a big introvert. Now, everyone thinks “introvert” means I don’t like people. At the end of an event, I will crash and burn because I’m best if I am in a room by myself. That’s how I charge my batteries. Extroverts, they love being around people. I love being around me. I love all of you. Don’t get me wrong. Don’t misunderstand that. But don’t think you have to be an extrovert. It’s just about whether or not I enjoy selling marketing? Yes, I do, because I enjoy people. I understand hearing their stories. I love hearing their challenges. So I love it. But operations don’t tend to.

But see, you don’t get innovation that way. Then you end up with what? So, everybody, when you start managed services, what happens? You go look around and you say, “What do you put in your managed services agreement? What do you offer? Can I see your contract? Can I see what you’re including?” And then you kind of cobble together something that’s a little bit of theirs and a little bit of this and a little bit of that. Then what do you end up with? Applebee’s. I’ll never get an endorsement from them, so screw ’em. But now it’s the middle, it’s just another place. It’s another restaurant, right?

Here’s a graphic Genius Of The Month Willian MacLennan referenced in his recent post about how he added $78,896 in MRR to his business. 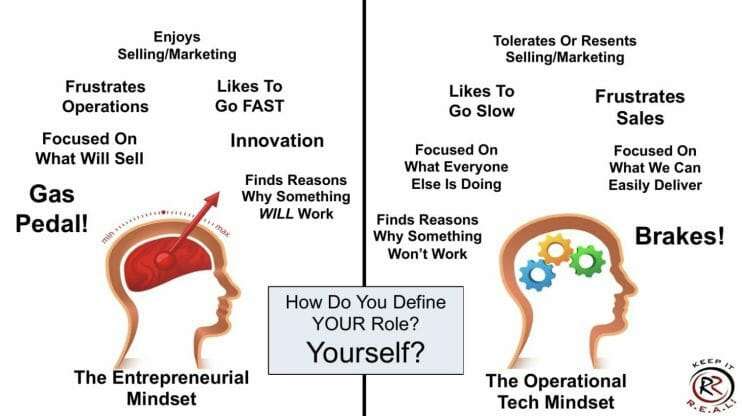 MSP Growth Tip #3: You get middle-of-the-road results because there’s no innovation.

When I first hired my first SDR (sales development rep/appointment setter), it worked… Okay, not great. Then I hired a second one and they worked out a little better, but not great. Then I thought, “Well, I’ve learned you hire two because one of them is definitely going to go lame,” right? So I hired two. So you train two knowing that one of them is going to go lame, and they worked out okay. Now, today, I’ve got eight plus a manager, but I didn’t get there overnight by saying, “Well, this didn’t work; well, this was crap.” I said, “You know what? As soon as that one didn’t work out, I’m hiring the next one. This one’s not working out… I’m hiring the next one. I’m running ads.” We’re running ads right now. We don’t even have a position because we’re always recruiting for salespeople because you never know when that rock star is going to come along.

I’ve learned that you’ve got to find “Let’s figure this out” instead of “What is everyone else is doing?” What I find is, the operations side is always saying, “This is why this won’t work; this is why this can’t work; this is the barrier.” Now, again, I’m not saying operations is bad. You need a good operations person. I’m not saying that. I’m just saying that if you’re all operations and no entrepreneur, that’s why a lot of your mindset is what’s causing you not to execute.

MSP Growth Tip #4: We all make decisions based on how we feel about things, and marketing and selling feels scary.

It feels like ick to some of you, believe it or not. I know, I know. When the number one online complaint I have about my company is we sell too much, when that’s the number one complaint, that’s okay. That’s fine. That reveals more about them than it does me.

You should see it, when I go to events, my good customers, my Producers Club members, they all sit in the front row and they’re taking notes because they know what to sell. They want to learn. They’re paying and not offended by it. They’re like, “I want to learn. This is great. I want to see a great sales pitch,” right? So it’s all about mindset. So if you look at our industry, 79% of all MSPs are under a million in revenue.  51% are generating less than $500,000 in sales, even though they’ve been in business for an average of ten years.

I have very extensive data because we do surveys through MSP Success, we have a very good database, CRM. I have a lot of data on this information. I’m very, very confident in this. Almost all of them make less than $150,000 a year and 53% make less than $70,000 a year. Think about it, they’re taking all the risk, all the work, all the hardship of running a business, and they could all go work somewhere else and get double that pay. Especially right now. Now, I’m not saying that you should do that. Well, maybe you should. I mean, look, not everybody’s cut out to be an entrepreneur. It doesn’t make you a bad person. My husband could never be an entrepreneur. He’s just not wired that way. It doesn’t mean he’s a bad person. But if f anyone’s going to be an entrepreneur out of the two of us, it’s going to be me. I’m more wired that way. It doesn’t make him stupid or lazy.

It just means some people aren’t cut out to be an entrepreneur. Simple as that. And this is what happens. My advice is if you are going to take all the risk and work and hardship of running a business…Don’t half-ass it! Don’t sort of do it because you could make more money. Just go work for someone else, right? If you’re going to go for it, go for it.

To discover “How To Set Up Autopilot Marketing Systems To Consistently Get At Least 1-2 Brand-New, High-Profit Managed Services Clients Every Month” click here.