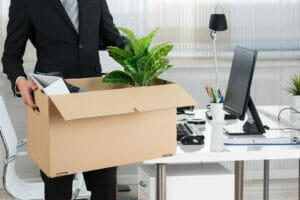 Here’s a real e-mail I received from a client this week: “Robin, do you think not hitting sales quota for the past year is a reason to let my salesperson go?”

Don’t laugh – we’ve ALL kept an employee long past their expiration date.

On several occasions I made the mistake of keeping someone with the hopes that they – or the situation – would get better. Who are we kidding? Most of the time we don’t act because we are afraid or anxious about the act of firing them, or because we NEED someone to do the job and we don’t have a good replacement. But let me tell you this: Keeping the WRONG employee around is a cancer, an enemy within, that will undo your organization. You will end up with a toxic workplace, unhappy clients, lost sales or WORSE. Cancer NEVER gets better when ignored.

In sales, it should be cut-and-dried. You have a quota; if you don’t hit that quota, you’re gone. I don’t give people more than three months to correct. After that, they’re gone. That’s not harsh – that’s what salespeople are hired to do: generate sales. If they can’t or won’t, they ought not be in sales and they CERTAINLY shouldn’t become your personal charity case.

But other times, it’s not so clear. People who are not in sales positions can be harder to quantify in results, and therefore it’s harder to determine if they are in need of coaching and training or firing. So I thought I would share with you my three irrefutable signs that someone has to GO. This applies to salespeople (of course), but also to anyone else on your payroll…

#1. You need to babysit them and check their work.

I tell my staff that if I need to leave my position on the helm of the ship to check that they’ve tied the knots correctly down below, they’ve got to go. Here’s something THEY need to understand: Their #1 job is to keep you as focused and productive in YOUR job as possible. If you’re having to constantly check their work, correct mistakes and missteps, and otherwise prop them up, they are not doing their job, and they are keeping you from doing yours. Don’t lose sight of the fact that you are PAYING them to do the job. None of my employees have ever had to remind me to pay them, nor do they have to inspect their paycheck every month to ensure I’ve paid them correctly. Therefore, I shouldn’t have to babysit them to do the job I’m paying for either.

In sales, that may be completing paperwork and contracts correctly. It may be the reports they deliver to you at the end of the week. It may be in properly following your sales process and following up on inbound leads and opportunities. Whatever way it shows up, YOU should NEVER have to babysit employees to do their job.

There are certain things you as the employer need to do to ensure your employees have the proper training, tools and resources to do their job – BUT there is a limit. If you hired a SALESPERSON to do a SALES job, they should at least know how to SELL. That is not an unreasonable demand. I don’t hire a private chef and then teach them how to chop vegetables or scramble an egg; they should KNOW that already. I might need to teach them our recipe for fried chicken – but if you’re running a kindergarten class on the fundamentals of doing the job, you made a bad hire. Fire them and find someone with the skills. It is NOT unreasonable for you to expect them to perform.

Sour milk NEVER turns fresh. Once an employee gets a rotten, disrespectful and bitter attitude toward you, they don’t recover. No matter how good someone is at their job, you cannot afford to retain them. No amount of motivation, incentive or “talking to them” will take the curdle and funk out of milk that’s gone bad.

Keep in mind it’s NOT your fault that an employee chooses to underperform and conduct themselves in a manner that leads to them getting fired. They’re grown adults and that’s on THEM. You would not expect a client to cheerfully pay you in full for consistently bad, sloppy and incomplete work – that’s not how business works.

This gets really hard if the employee is a rock-star salesperson who’s bringing in a lot of revenue. I get it. In fact, the now-late Jack Welch talked about “Star Performers” being among the most disruptive people in an organization. His viewpoint on it matches mine: do your best to coach them and straighten them out – but if they continue to be disruptive with BIG egos and a smugness of “You won’t fire me,” get rid of them. You don’t need them undermining you as you and your team attempt to grow a company. Tolerating bad behavior from someone like that sends a message that disrespectful, rude and unprofessional behavior is acceptable. It’s not. Don’t allow it in your organization.

On the flip side find out The Secret To Finding, Hiring And Keeping GREAT Employees.