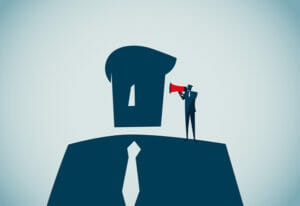 The first real sales training I ever received was when I was working for Tony Robbins as a rep selling his Personal Power and Power To Influence courses. It was a great experience, to say the least. Tony taught his reps to ignore the first “no,” saying that some prospects throw out an objection or a “no” just as a means of conversing. He’s right to a point.

Time and experience have taught me there’s other more important reasons to “ignore” the first objection you get.

To be clear, you don’t “ignore” it in the sense that you don’t hear them out or you brush it off – but what you DON’T want to do is immediately jump on it, defending your point of view.

Such actions are rookie mistakes. Instead, hear them out and ask questions to explain it. They say, “The price is too high.” You could mirror them, repeating back the objection with a curious, questioning tone: “The price is too high?” Or say, “Compared to…?” and then wait for them to fill in the blank.

Or get them to explain it by asking for specifics: “What do you feel is too high – the project or the monthly fee?” Or, “Okay, is that your only concern?”

Another time to “ignore” the “no”: When they voice their objection out of the blue and at a point in your presentation where addressing it would take you out of the flow.

For example, you’re in the middle of explaining your recommendations OR you’re in the thick of asking questions about what they want, what they need to prescribe a solution. If answering it right then would be totally off track, acknowledge it, write it down and don’t forget it – but don’t address it immediately.

It could be that they’ve misunderstood something, or that you have not explained yourself well. It could also be they are using that as a smoke screen for a different concern OR are simply not articulating their concern well. Perhaps “price” means the “cost” of the transition – the work involved, their fears of having to tell the other provider, the terms of the agreement, etc. Never take an objection at face value without digging a bit more.

Another approach is using what’s called a “box” close. You ASK the prospect what their concerns are. “I’m sure you have some concerns now, or will have some about moving forward with this project. May I ask what they are?” Doing this, you invite the objection, opening the door for the prospect to “spill the beans” and tell you everything they’re thinking and concerned about.

AFTER they’ve given you all the things worrying them AND you’ve heard them explain why those things are a concern – AND you’re certain you can help them (meaning they want things you can deliver, not things you are unable to do or deliver), then you use the box close:

“So, Bob, let me summarize. You want X, Y and Z (results, outcomes). But your concerns are A, B and C. Is that right? Anything I’m missing? Okay, so if we can solve A, B and C and deliver X, Y and Z, this project is a go? Excellent.”

THEN go back and handle each concern or objection in order, checking each one off. Most prospects have only one or two objections, not dozens. If someone HAS dozens of objections and continues to feed them to you one after the other after the other, making you feel like you’re in a whack-a-mole game, they’re either a giant pain in the arse and should be avoided or they are flat-out not a buyer. Either way: exit stage left.

To summarize, when an objection is raised…

One final key point: Your job as a salesperson is not alchemy – and you’re wasting your time trying to wrestle a check from someone who really does NOT want to buy. Don’t waste time on those CLEARLY uninterested in what you’re offering or who aren’t a right fit. Some “not interested” responses are sincere and attempting to convert them into anything else will only irritate the prospects and frustrate you.

Need help with your MSP sales? What about a PROVEN, documented sales playbook for closing more IT service sales WITHOUT gimmicks, discounting or having to do a lot of “convincing”? Get it at www.sales-a-palooza.com