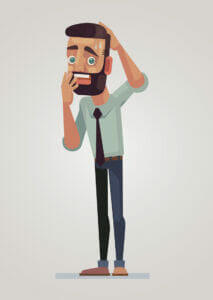 A couple of years ago at the Chicago Roadshow, mid-morning the first day, the power went out. Supposedly a squirrel met his untimely doom with a transformer.

No lights, no microphone, no air conditioning and no projector. I was onstage at the time and paused only for a minute to make a funny comment about the power being off, but then kept right on speaking. Many commented how impressed they were with my composure. One even railed on Facebook that all women entrepreneurs and feminists ought to take note of “how it’s done!” I found all of this funny.

There was only one reason I was able to go on with the show: NEGATIVE PREPARATION.

I had this same situation happen at one other event years ago and was woefully unprepared for it. It cost me dearly in sales because I was so dependent upon that PowerPoint that I was barely able to continue going. The room became swelteringly hot and I lost my voice – but I learned.

Now I keep a backup on paper of everything we need electronically for this very reason, which is why I was able to keep going. I also have a lighter dress shirt to change into (and out of a suit jacket). I also know how to control my voice so it doesn’t die by 5:00 p.m. from shouting at the room.

But the power going off is just one of DOZENS of things that can go wrong at events, many of which you cannot anticipate. At one event in Vegas, I had a sex-toys convention parked next door that was EXTREMELY vocal (I’ll let you imagine from there), making it near impossible to hear and HIGHLY distracting for people in the room. Some attendees went on break and didn’t come back. Hence, we now have a “noise clause” in our contract. That came in handy at a Boot Camp where a marching band decided to practice in the next room.

Another hotel had a flood, and the stench of mildew was so strong and noxious that some attendees were forced to leave. Now I have an “odor clause” in all contracts.

We also have a no-competitor clause and a construction clause. These are just a few of the things we do to avoid disasters and things that could throw the event off track. While we cannot prevent it ALL, we have (knock on wood) never had to cancel an event or suffer complete “disaster” in not being able to deliver.

In sales, you need to prepare for everything that might throw off closing the sale.

Make a list of every question, every concern and every objection that may come up. Think of every negative thing that could happen.

The decision maker is not in the meeting. A competitor comes in cheaper. A friend of a friend is working an influencer on the inside. They want to wait and “think it over.”

Then, instead of hoping nobody notices the elephant in the room, address it head-on IN ADVANCE, either with your marketing materials, a qualification phone call or early in the sales meeting so you don’t waste a ton of time on a prospect that doesn’t close later on due to an unstated (or stated) objection.

If you’re looking for more ways to improve your sales, check out our FREE guide for IT Services Businesses “6 Ways To Double Your MSP Leads, Appointments and Sales…WithOUT Spending A Dime On Marketing.”