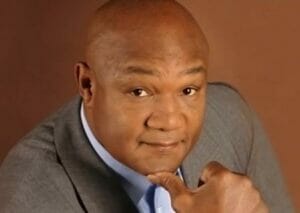 Two-time Heavyweight Champion and genius entrepreneur George Foreman will be ONE of the keynote speakers at our upcoming Boot Camp. Some have criticized the decision, saying, “We’re IT guys – not a room full of professional boxers or TV personalities, so why waste time listening to THIS guy?” So, please allow me to address that AND serve the dual purpose of delivering a solid “fundamental” in marketing that everyone needs to understand: personal brand.

For starters, many people think I’m against branding since I often say (and do believe) that spending money on branding ads and promotions for the sheer purpose of image advertising (not lead generation) IS wasteful. I prefer marketing that can be ruthlessly held accountable for a return that does the dual purpose of branding.

Further, I believe that building a personal brand IS a very smart, strategic approach to differentiation in a world where true differentiation is difficult to come by. George is a perfect example of this.

He took an ordinary kitchen appliance that could be gotten anywhere and turned it into one of the best-selling products in retail history – and he did it purely on his own personal brand.

George was VERY strategic and purposeful about building himself into a likable personal brand when he came back to win the Heavyweight Championship in his 40s, which was the true critical key to not only the success of the grill, but also to him obtaining multiple big, fat endorsement deals with other companies such as Nike and Meineke.

The first time he won, he admits, he was a mean, nasty SOB that nobody liked. When he retired, he realized his error. People forgot about him. Endorsement deals weren’t coming in and his money was drying up.

So, against all odds, he decided to go BACK to boxing to get the money he needed and wanted – only THIS time around, he showed up as a more humble, God-loving, funnier and approachable George Foreman. He created a totally different personal brand, one that fans adored and rooted for.

Now, here are a few keys to creating a magnetic personal brand:

If you want a basic starting point, at least decide who you’d like to be known TO. From there, what do you want them to know you FOR? What set of guiding principles do you stand for? What do you want your company to represent? From there, you have the foundation to start creating content and promotions to convey that to your chosen audience.

And if you want more powerful marketing strategies, templates and blueprints to grow your MSP, AND hear from George Foreman live, get registered for Boot Camp at www.RobinsBigSeminar.com before it’s too late!