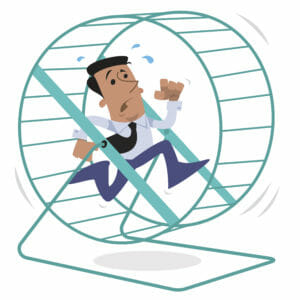 From AdWeek: 62% of small businesses see NO return on their investment in Facebook.

From Forbes: 44% of businesses can’t even measure social media ROI.

Despite this, according to a survey from the Manifest, 63% of small businesses plan on increasing their spend on social media (!). One social media “expert” commenting on this said that “not all social media traffic generates revenue” (Really? Who’da thunk) and went on to suggest that “you might measure conversations that originated with a social media visit and use that as a gauge of success.”

He went on to say that it was especially important for start-ups to get followers because an initial “audience” was more important than an initial customer base.

I’m often asked by members if it’s “worth” posting articles and other content on social media sites. They want to know if it’s a good idea. When I ask, “What are you hoping to accomplish with these activities? What does success look like?”

I’ve never had anyone give me a precise answer. Not once. As in NEVER.

They almost always go on to tell me why they are doing it – which is not the question I asked – and that response is almost always based in some feeling that they should be doing it.

What they don’t say, but I’m sure is also driving their actions, is that this is something relatively easy to do, which makes them feel like they’re doing something (activity).

But if activity was the only thing necessary to get results, you could hold a sign up and run around a business- park parking lot and reach as many (or more?) prospects. At least you’d get some exercise.

This is probably the #1 cause behind social media fails – they are investing time into activities without a clear purpose or way of defining success, thereby having no strategy for implementation, no understanding of why they’re doing it, no plan for how they are going to move someone from reader to lead to client, and THEN being confused by all the crap being taught by a litany of social media buffoons out there telling them to focus on getting followers instead of paying clients!

But the bigger fail is that there are dozens of other things they AREN’T doing that COULD work to bring in clients – and if they DID them with the same frequency as their Facebook and LinkedIn posts, they’d get a hell of a lot more results.

When I point this out, almost all will say, “Yeah, but I think I’ll keep posting … what harm could it do?” So, a couple important thoughts about this …

You get ZERO right to complain about poor marketing results and how time-pressed and overwhelmed you are IF you are simultaneously participating in this kind of foolish behavior.

The #1 reason (excuse?) I hear for lack of a good, productive marketing plan is a lack of time.

If that’s true, AND you sincerely want to generate more sales, grow your business and get a reliable client-getting system in place, then you have no business burning a single second on anything that’s not productive or that you’re doing just to do (activity).

Let’s be clear on one thing: “productive” marketing activities are ones that directly, specifically and reliably bring you a paying client. That’s accomplishment.

Instead of taking an hour or two to write and post an article on LinkedIn, how about taking that hour to specifically, strategically select 10 key prospects and influencers, research them, formulate a plan of how you can be of value and then send them a direct message?

You’re still using social media, but now you know you’re getting a carefully crafted message to a very specific and targeted list of people instead of hoping they see your article. Most won’t do this because it requires actual strategy and thinking.

Posting an article is MUCH easier – but it’s nowhere near as productive.

Another example: A few months back, a vendor came to me for advice on how to get more productive partners. They had over 15,000, but the problem was that only a small percentage – roughly 800 – were worth anything, doing anything, selling anything.

Part of the problem was that being a partner required no monetary commitment, nor did they have any type of filtering process to even know how many of those 15,000 were real MSPs and not competitors, fakes, etc. They also lacked an ascension plan for taking a new prospective partner from “opt- in” to actually selling their solution.

Sure they have an ego-boosting number of reseller partners (activity), but no real accomplishment to show.

“Last week we went to a local CPA (our niche) seminar. It was attended by a group of about 25 CPAs and we gave away some rubber ducks (check out picture attached). We offered a free network audit and had some really great feedback. We were able to schedule four to five audits from a group of 25 people (two of whom are already our clients). We haven’t completed the audits or closed any deals yet, but this is definitely a great start and we encourage you guys to look into some local shows to attend.”

I know that SOME people would be annoyed if they did “all the work” to create and set up a display and invest time and money for an event to get “only” 25 prospects; however, THAT’S confusing activity with accomplishment.

In case you didn’t notice, Mario nailed a 25% response rate, which is insanely good, potentially higher, given that some of the 25 may not have been CPA prospects or could have been from the same company.

I promise that if there were 2,500 or 25,000 at the show, he wouldn’t have gotten that same result. Further, these are four to five productive leads, given they scheduled the audit and didn’t just pop a business card into a fishbowl to win a drone or gift card.

If this article has been a wake-up call to make your marketing more productive, sign up for a FREE, private, one-on-one consultation where you’ll get a customized marketing road map to get more leads, appointments and sales for your company. Go to https://www.technologymarketingtoolkit.com/consult