For the first time in America, 1% of Americans are millionaires. This is the very first time this has ever happened. We have just experienced during COVID, the largest transfer of wealth in our history. Go look it up. Seriously. The total wealth of US billionaires grew by $1.3 trillion during the first 11 months of the pandemic. That’s a 44% increase in wealth and the US has also added 50 billionaires during this time, so there is plenty of money out there. Don’t let anyone tell you differently. If you look at the growth that’s happening right now for MSPs and in our industry, any poll you look at, all point to a CAGR compound annual growth rate of 12.5% so our industry is growing.

I pulled this from a really good report ConnectWise put together, I’d recommend you guys get it. It suggests that SMB total spending will grow at 6%, but spending on managed IT services is going to double and that is in the SMB space. Talked to my friend Rob at Datto, I asked him for some some facts or statistics he had and he gave me something I thought was interesting. Frost and Sullivan did an independent study, and they estimate that the number of MSPs globally will grow about 3.5%. Now, that may sound small but there’s so many mergers and acquisitions to take into account. Now, this Channel Pro survey is more of a “How do you feel?” survey and what was really interesting was that 40% said their net revenue and net profit between 2020 and 2021 grew, 40% said little to no change, and 20% said that their revenues actually declined. And when asked what do they think is going to happen in the coming years, 64% were very positive that revenue was going to be growing, 31% say it’s going to be about the same so it’s only a very, very small percentage of people feel like revenues are going to go down in the near future. Fortunately, that’s very, very good news! 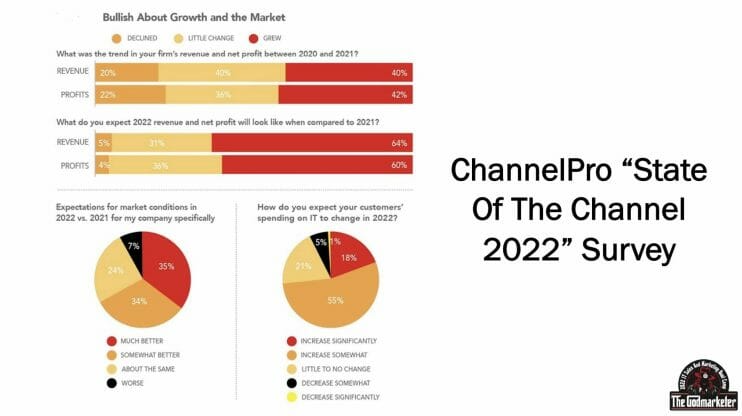 Now, this next information came from Kaseya, I went to all of our key sponsors and asked them for some of this data. So we know there’s the SMB (small medium business) and the M in SMBs are the businesses that are anywhere from total employees of 40 to 4000 and they have 1 to 40 IT people. This is your co managed group and the research that they’re showing is the percentage of IT functions that are going to be outsourced to an MSP are going to grow exponentially from 34% in 2020 to 65% or even as high as 81%. So this is a significant trend and what’s pushing it is that 61% are looking for specialization and obviously cyber security, compliance or cloud technology, certain things. So this is a very, very good trend. This also includes labor costs, of course. 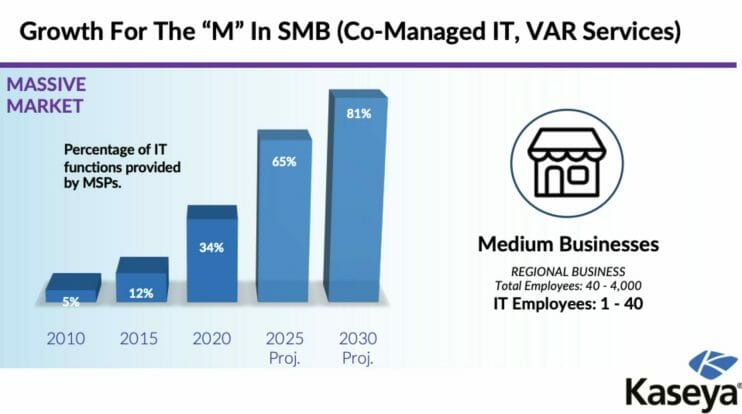 If you guys are finding it hard to hire, so are larger organizations.

How many of you are selling more comanaged services these days? You’re going to be seeing more and more of that and these are really good contracts because they are more likely to sign longer term contracts, and be more professional and knowledgeable buyers. The contract size, which I thought was very interesting, is roughly about 15,000 to 30,000 per month.

So I’ll tell you this, it’s not 10x harder to get a $30,000/month contract than it is a $3000/month contract. It might be a little harder, but it’s not ten times harder. So you want to think about this as an opportunity and this outsource trend is going to continue to grow. For most of our Producers and Accelerators members who report their numbers, most of you are still stagnant on new customer acquisition. So a lot of you are as busy as hell doing projects, maybe raising your prices, selling advanced cybersecurity compliance but you’re not adding a whole lot of net new clients and new. So that’s an area that we need to look at.

To discover how to drive more sales and more profits for your MSP in this new economy, click here to register for our livecast or go to https://mspgrowthplan.com.