Here are 5 ways to build financial strength in your MSP. You need these because MSPs, are hanging on by a thread, but they think it’s a rope.

They are one bad month, one bad client away, one bad employee away from really being in a very bad place. You have to decide that you either want to keep it so micro small you can control everything or get to the 5 million mark as fast as you can because it’s the in-between that you have a lot of risks, but you don’t have the coverage, you don’t have the leverage.

So let’s talk about 5 ways you can build financial strength in your MSP.

#2: Make sure you’re fully capitalized, meaning you have 2 to 3 months of retained earnings in that business for an emergency or an investment because sometimes an opportunity will pop up and you want to have some cash to be able to do that as well.

I wrote two checks. I would not have been able to do that if I wasn’t fully capitalized with retained earnings and no debt. So, this is really key. This builds strength.

So, when I polled everybody in here, the whole Roadshow, we’ve had over 850 people, I think it might be over 900 people who registered for Roadshow. We gave them a poll, 30% said they’re up more than 10%. Now, 2020 was tragic in a lot of ways, but for it, you suddenly became a lot more essential.

#4: You should be growing 10%. The market is growing by 10% due to compliance, cybersecurity, and co-managed. So, if you grew 10% this year, you basically stood still because the market’s growing 10%. A rising tide lifts all boats, right? So, there’s no great honor. If you grew 10%, you want to see 15 to 20% year-over-year growth at a minimum and by the way, get into that rhythm, get into that cadence that you’re growing and growing and growing. Right, because that builds energy and that builds strength.

#5: Diversify your income. This is a big one. So, no one client represents more than 10% of your total revenue.

Here’s the thing. You are going to lose your best customers to mergers and acquisitions, right? So, if you think about your best customers, they are typically, what, larger companies growing? Who buys those? Those are the companies that get bought. They’re your sweet spot customer because they outsource their IT and they’re growing and they’re spending money and they have money to spend. They’re the ones you’re going to lose to mergers and acquisitions.

That’s also why sales and marketing systems are important because cranking those suckers up from a cold start, that’s tough. If you have the systems going, you can replace the income. It’s easier. Here’s How To Start: You start like if you’re standing still, you know, if I was going to run from here to those doors.

If I’m standing still, it’s going to be slower than if I back all the way up and I’m already at a full run and I start here at a full run. I’m going to get there faster. Right. So you want to make sure that you’re continually doing marketing, making sure you’re replacing those customers, and diversify your revenue so no one client represents more than 10%. That’s really key. 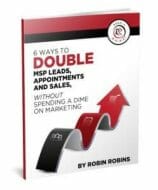 For more ways to build financial strength in your MSP, get more leads for your IT services business and get more managed service clients, grab our free guide at https://technologymarketingtoolkit.com/sixways