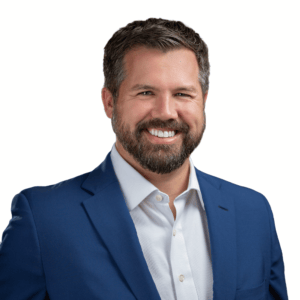 Entangled In The Dark Web Of Doubt For 6 Straight Years

The dark web is not a thing or a place. It lives among us, learning, adapting, embedding itself into the very fabric of our digital footprint, now synonymous with daily life. As CEOs, we’ve come to know the dark web of running a business. It preys upon your every insecurity, finding weaknesses in your defenses and your motivation to proceed, give extra effort and outsmart the competition.

And just when you feign success in lieu of giving in, hoping it will be enough to try for one more day, it swoops in – doubt, fear, hopelessness, desperation – and steals it in front of your very eyes.

Two years in, I thought my business was going strong, then BOOM! Three of my TOP CLIENTS representing 60% of my total revenue…GONE! After that gut punch, we operated with a skeleton staff. Under $1M, I was working IN the business, not ON the business. I was so broke I couldn’t even pay myself! The Dark Web of Doubt loomed large. Zero direction. Zero consistency. Zero marketing tools. Zero confidence… For. Six. Straight. Years!

Bottom Line Growth Of 142% Since Starting With Robin

My turning point came in 2016 when I received a letter from Robin Robins. Let’s just say the Godfather had spoken to me. Before that point, I was spending only .2% (yes, point two percent) of revenue on marketing. Suddenly, marketing was the primary driver for our business, which enabled us to open two new offices, one in Baton Rouge, LA, and another in New Bern, NC.

In the next two years, I acquired an MSP in Washington, DC, hired two new outside salespeople, hired a VP of Marketing and endured not one, but TWO rebranding initiatives. Plus. I also attended the Technology Marketing Toolkit’s Rapid Implementation Workshop TWICE in 2018!

As I attended Producers Club quarterly meetings and became very involved in the Robin Robins organization, along with being an Accelerators Club Coach and mentor to other MSPs, my belief in her system and campaign strategies was further solidified.

At the end of 2018, we were a $2M company. I remember telling my team we would be a $3M company in just one year. They looked at me like I was crazy. Like, how can you grow a business by a THIRD in just one year? Everyone around me was telling me I wasn’t going to grow $1M in one year…but I decided to ignore their doubt (and my own Dark Web of Doubt) and went for it!

First, we kept a Top 5 List Of Clients. As important as it is to have a Top 5 client list to know who you should spend most of your time and attention with, it’s also necessary to have a Top 5 Chopping Block Client List. Robin taught me that “not all money is good money.” We actually LOST seven clients in 2019 and became far more profitable. Figure out which difficult or low-paying clients to add to your own chopping block.

Second, we increased our pricing. I remember telling Robin, “I’m in Atlanta, where the market is saturated. I just can’t raise my prices.” (BTW, you probably think your market is too competitive as well.) Robin simply responded, “Yes you can. Raise them.” What really forced me to inflate my prices was talking with Jay Ryerse, former Better Your Best winner and, like myself, the owner of an Atlanta-based MSP. He said, “In the Atlanta market five years ago, I was charging MORE than what you are charging TODAY!” What a wake-up call.

In February of this year, I called Robin about a new client proposal. I told her I was hesitant about charging this whale client our full price. She convinced me to not cut my price one dime. As a result of sticking to my price, we won our biggest deal ever – a total contract value of $5M over four years plus an additional $15k a month in MRR!

Third, we consistently delivered a massive amount of marketing…

MSPs are always asking Robin, “What’s the ONE CAMPAIGN that will push me over the top and take me to the next level?” It’s never just one campaign. There is no “easy button.” What we’ve learned is that you must do a LOT of everything: a variety of marketing campaigns and a strong mix of media, all with a commitment of consistency and continuous follow-up.

Rather than cast a wide net to hundreds of random people, we are very diligent about focusing our marketing on a smaller group of quality prospects and current clients. That said, our Dream 100 Campaign is our best because we consistently market to our ideal prospects to bring them one step closer to becoming Vector Choice clients. Social media posts and cyber security webinars have been good to us as well.

In response to today’s environment, we recently launched a Covid-19 Webinar, which brought in $337,000 in new project work! While businesses are shuttering and many owners are tightening their belts, there is still a lot of opportunity out there, especially by transitioning businesses to work remotely.

We learned that you can’t simply implement a marketing campaign to check it off the list. In order to gain new business and MRR from campaigns, they must be well executed. Here are six strategies we implement to maximize our results from every campaign:

Building My Celebrity Branding One Blue-Suit Appearance At A Time

At many of Robin’s events, I noticed a consistent message of “singular celebrity.” That by representing myself as the go-to IT authority in my market, I would naturally draw interest to my subject matter and ultimately to my business. Sitima Fowler knew this secret and built her celebrity to grow her MSP to record levels and win last year’s Better Your Best competition.

As much as I believed in this personal branding opportunity, I could never see myself in front of a large audience or doing television appearances. I was too shy and worried I would butcher my speech. But I knew it was too important to let my fears get in the way. So, I started speaking to small audiences and over time got more and more comfortable. Before I knew it, I was asked to do TV interviews and some crazy people were actually PAYING ME to speak!

Always donning a blue suit, I am building my personal brand as a CEO and expert in cyber security, which funnels opportunities back into the business. In the last 12 months, I have done 14 speaking engagements in front of large audiences, 16 television appearances and several radio interviews and podcasts. With every appearance, I gain more authority and credibility with both clients and prospects. Not only do they take my marketing efforts more seriously, I can command a higher price because of my singular celebrity.

When you look back, you realize that your Dark Web of Doubt is one you wove yourself, one you could have easily escaped without permission and one that is easily avoidable in the future. Technology Marketing Toolkit was basically my own personal Dark Web Scan – showing me where I had been breached before and how I could fortify my own network to avoid the same fate down the road, with the help of my Producers Club team and members. Ultimately, confidence – the kind that is earned, not bestowed – is the golden key that will drive you in any direction you choose. But only if you’re up for the ride of your life.

Today, I have the direction, the consistency and the marketing tools to confidently grow Vector Choice to a $4.5M company this year, a $15M company in five years and a $30M company in 10 years. Just this year, I accomplished worthwhile goals, such as paying off $550,000 of company debt, renting a Lamborghini for a day (blue, of course) and standing on the Boot Camp stage as a Better Your Best finalist!